The just completed Royal Adelaide Show was a bonanza for south east studs, and in particular, the Coolawang Border Leicester stud.

Trevor and Judy James and family, Coolawang Border Leicester stud, Mundulla had an outstanding showing in the 2010 feature breed showing, but proved their quality runs deep with another outstanding showing this year. They were again the most successful exhibitors in the breed, with the highlights amongst their many awards being wins for both the junior and grand champion Border Leicester ewes. Their grand champion from the senior ewe classes then went on to further success in the interbreed classes, winning the champion longwool ewe of the show. 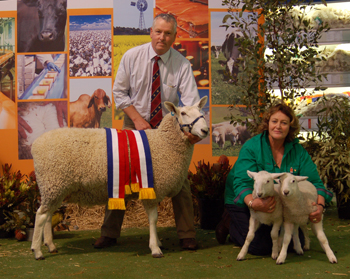 Trevor & Judy James hold their grand champion Border Leicester ewe and her twin lambs, this ewe then going on to be the champion longwool ram of the 2011 Adelaide Royal Show.