We had another very successful Adelaide Show campaign, including: 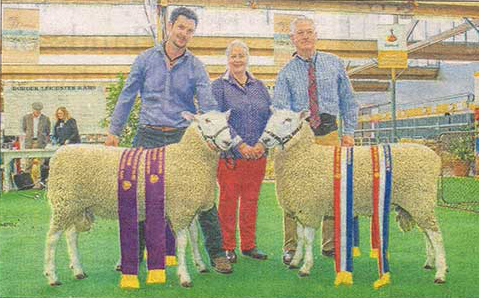 Article courtesy of The Stock Journal
By Elizabeth Anderson

The 13-month-old ram was named Junior Champion, then Champion, in its first showing. It weighed 102 kilograms, with a fat depth of 12 millimetres and eye muscle depth of 40mm.

Coolawang principal, Trevor James, Mundulla said the ram was a favourite of his. "It parades so well, is good on its legs and stands square," he said. "It's a very alert sheep - always interested in what's going on."

"The Champion ram is balanced, upstanding, with good neck extension and width in the back legs," he said. "It's a mighty powerful ram, with lovely stretch, style and balance. It has a lovely nature and is a real credit to the breeder."

"It's a lovely fine-fleeced animal with good style and balance," he said.

The reserve junior champion ewe was selected in an unconventional manner.

Mr Sutton exercised his option to include a Coolawang ewe that caught his eye in the under 1.5 years shorn pairs.

"It's a magnificent ewe - upstanding, lovely and even right throughout," he said.

Mr Sutton was full of praise for the top quality of sheep, describing it as a 'fierce' competition.

"Based on the style and quality of sheep paraded, SA continues to produce some of the best sheep in the country," he said.