November’s Horsham Border Leicester Show & Sale produced one of its best ever results, with 34 rams averaging $4323. This was the highest average for at least 10 years, but the overall clearance was slightly down on last year.

The large crowd included 50 registered bidders, but they were selective in their bidding. With 45 rams on offer and 50 prospective buyers, it was a little surprising that 11 rams were passed, but this is often the case with stud sales. However, in line with the current high demand for sheep including Border Leicester flock rams, the top end was very strong.

In the presale judging under highly respected NSW based judge, Mr Barry Harper, Ariah Park it was Trevor and Judy James, Coolawang stud, Mundulla who came out on top with the blue ribbon from 44 other rams.

They have come off a very successful Adelaide Show and annual sale and had another high here when Coolawang 248/10 was awarded the pre-sale blue ribbon. This ram was Coolawang's Adelaide Show bare shorn ram entry and Barry Harper backed his judgement by placing the $5,500 winning bid to secure him at great value for his Ariah Park based Cadell stud.

Coolawang had a very solid and consistent sale result with their 3 rams selling to a top of $6,500 and averaging $5,167. Will Schilling, Glenlee Park stud, Nhill, was the purchaser of their top priced ram, while Martin Hahn, Nampara Pastoral, Penola SA, purchased the other for $3,500 after also being prominent at the recent Coolawang annual sale. 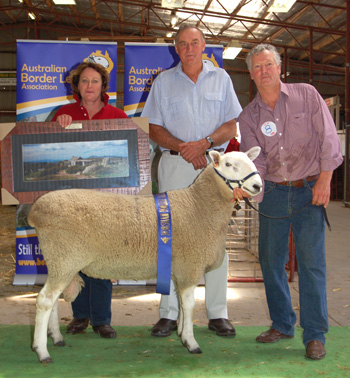 Horsham Border Leicester Show & Sale judge, Mr Barry Harper (middle), Cadell stud, Ariah Park NSW, is pictured with the Coolawang ram he made his blue ribbon winner from 45 rams in the presale judging and is with Coolawang principals Judy and Trevor James, Mundulla SA. Mr Harper later backed his judgment and bought the ram in the sale for $5,500.